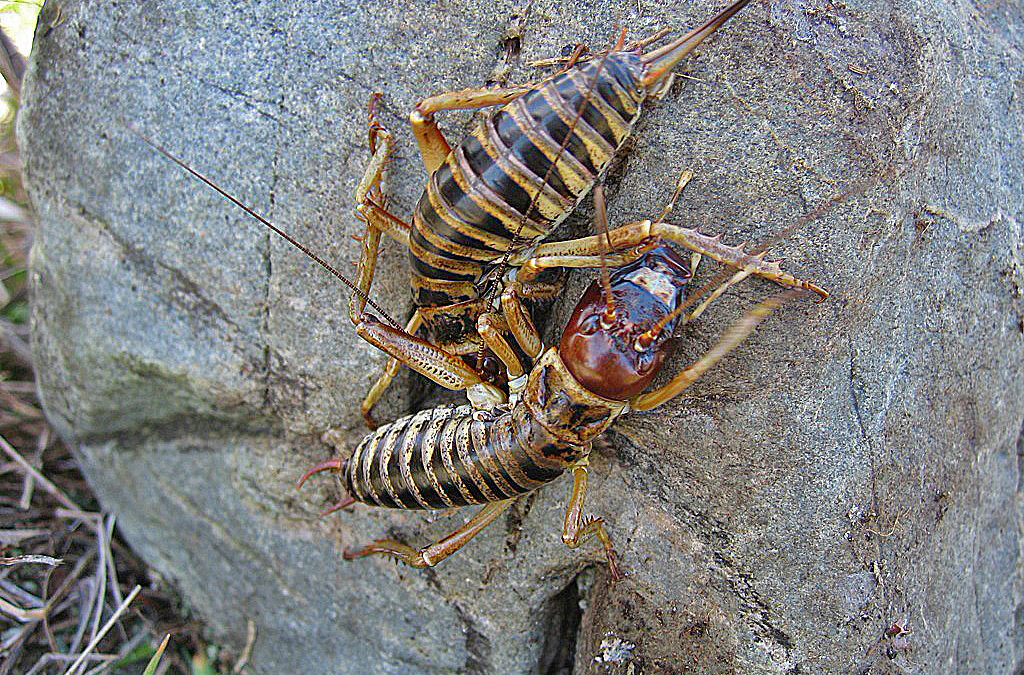 One of the highlights of our tour to Mou Waho Island is the chance to see a bizarre
creature close up. The mountain stone weta, Hemideina maori, is a large, flightless insect which lives in rocky, mountainous locations at altitudes of 1000-1500 metres. However, the island population in Lake Wanaka is an exception to that rule. Here, the species flourishes at an altitudinal range of just 300-475 metres. The first few weta possibly ‘rafted’ to the island on floating logs and the population has grown over time. The only other place where this species lives at such a low altitude is on neighbouring Mou Tapu Island. Although classed as a tree weta, the mountain stone weta is mostly found on or near the ground. During the day, weta on Mou Waho hide in rock crevices, tree holes, rotten logs or thick vegetation. Weta are nocturnal insects, emerging from their refuge after dark to forage on the ground and in trees. Adult weta grow to 60 millimetres in length and can weigh up to 10 grams, similar in size to a small mouse. They are omnivorous, feeding on a range of plant material, live invertebrates and decaying matter. Male weta have larger mandibles (jaws) and heads than those of females. Their mating season occurs just before winter sets in. Males live alongside a harem of up to seven females and will use their large jaws to fight off other males to defend their harem. Females deposit eggs into the soil using a long ovipositor which protrudes from the end of their abdomen.
Surviving in the cold, dry, alpine zone calls for special adaptations and the mountain stone weta has some rather unique ones. Firstly, they lose less water through their cuticle (outer shell) and during respiration (gas exchange) compared to lowland weta, giving them increased resistance to drying out. Secondly, they have perfected a method of cryogenic freezing. Over the cold winter months, this species of weta can survive being frozen solid at temperatures of -10 degrees Celsius for up to 17 days duration. How is this suspended animation possible? Their haemolymph – the insect equivalent of blood – contains an amino acid which prevents freezing damage in their cells. Therefore the cells don’t rupture as they freeze and ice doesn’t form. Up to 82% of their body water can freeze – the highest known percentage for any invertebrate in the world.
Mou Waho Island is a predator-free haven for birds but not for weta. The steely-eyed
buff weka was introduced to the island in 2004 in an attempt to establish a safe population of these rare birds. However, a weka can gobble a weta in an instant, so the weta must be vigilant and on the defensive. Their tactic if confronted by a threat is to ‘play dead’ – they lie still on their back with legs splayed, exposing their claws and jaws. If that isn’t enough to deter a would-be predator, weta can also bite or regurgitate (vomit) which could startle the offender long enough for making a quick getaway. Our guide will point out the ‘weta motels’ which act as safe refuges on the island. Hopefully a few weta will be in residency at the time of your visit.