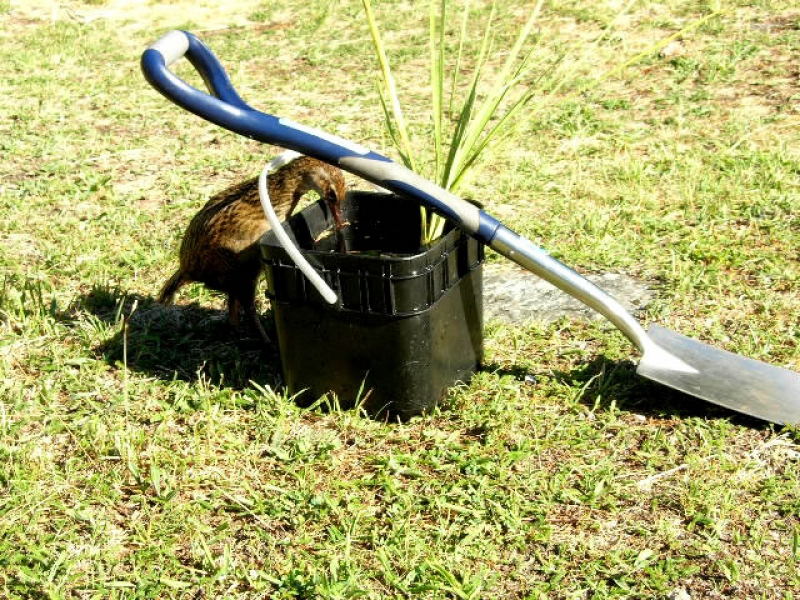 At Eco Wanaka Adventures we are passionate about the conservation of Mou Waho and our guests are keen to share in the care of this special place...

Therefore, on each and every trip since early 2007, as part of our Mou Waho tree planting initiative we take a locally grown New Zealand native species to plant out on the island. It is heartening for our staff and returning guests to see how well these plants are thriving in this predator free environment without the threat of introduced pests like the Brush-tailed Possum.

The natives we plant are chosen from a Department of Conservation approved list of species suitable for the island that not only reflect the original plants found on the island but are also great for supporting the endangered and fascinating animal species we find on the island.

One plant that provides both sustenance for wildlife and interest for our guests is the largest Fuchsia species in the world, the Kōtukutuku, with its vibrant pink flowers, bright purple pollen and gnarled papery bark the Kōtukutuku is a captivating plant. And the birds like it too. Tui & Kererū (NZ Wood Pigeon), often frequent the berries which are even edible to us, with many comparing the taste of the berries to Turkish Delight!

One of the most striking plants you are likely to encounter on the island is another species we regularly plant, the Lancewood or Horoeka (Pseudopanax ferox and crassifolius).The Horoeka is a master at adaptation, starting out in life with its distinctive sword-like leaves, tough and barbed, these leaves are rather unappetising to any potential herbivore. Historically, this would have been the Moa and so when the Horoeka grows up above the height a Moa could reach (generally over 3 metres), the plant changes its leaf shape to a thinner, wider leaf, more efficient for photosynthesis – the adult foliage. This is a phenomenon known as Dimorphism, basically meaning two-shaped. One way we are fairly certain the Horoeka evolved in this way in response to Moa grazing, is that examples of this species can be found also growing on the Chatham Islands that start out with the adult foliage and don’t exhibit this dimorphism as no moa fossils have ever been found there!

The Maori had several uses for this plant, using them as bird spears as well as tying a knot in the stem of a young plant so that when it matured it would make a great walking stick with a handle. However, for the modern tramper, they still have a use. The yellow mid-rib running along the centre of the young leaves makes a fantastic back-up boot lace!

We source our plants from Te Kakano Aotearoa Charitable Trust Community Nursery and Matukituki Natives, both based here in Wanaka. Check out the Te Kakano website to see how you can support the fantastic work that they do with the Mou Waho tree planting project and make sure you come along on one of our Lake Cruise & Island Nature Walk trips we operate to experience the fantastic wildlife on Mou Waho for yourself and help us plant a tree!.